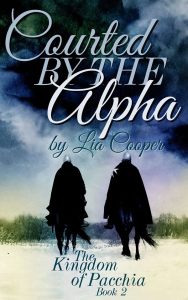 Ok guys, I’m going to try to get on the ol’ writing horse with a challenge to write 500 words a day and post them for Pacchia 2–much like I did with Pacchia 1. I’ll be posting it on Wattpad and here on my blog.

Click to read Courted by the Alpha: 001-Prologue on Wattpad!

or Click the MORE button to read the prologue here on the blog!

He was Lord Riven now, thanks to one god-forsaken traitorous Duke. Eight years crushed under the weight of the title made that fact impossible to forget.

He was the last Lord Riven so long as his sister remained unmated and likewise childless. He could not die in this field. Not today. Not at the hands of foreign mercenaries—bought by his grasping neighbors, too cowardly to fight their own way to his door.

Deirik Riven pushed his black hair, lank with sweat and blood, out of his eyes. His gauntlets flexed, creaking under the weary pull of his fingers as he resettled his sword hilt in his right hand, the weight of it drawing down his shoulder.

Still, as he stared up at the cresting wave of the enemy’s cavalry, wishing uselessly for a pikeman at his shoulder, he reflected that there had to be something noble about an end such as this—though he denied the prospect in the same breath. What better than to fall in defense of one’s family? In embittered combat to hold onto one of the last good things he still possessed in this wretched life?

But no—no, better not to entertain such a thought as that, not even for a moment.

The last Lord Riven planted his feet in the muck and ducked low under the first rider’s swing, cutting the horse’s legs from underneath his enemy and unseating the man with a harsh cry and a flash of silver under the heavy sun. Dierik met the man’s sword, hacking at him, pushing the advantage to keep the taller man off guard.

Around them, the loyal vassals of House Riven, few though they were, the sons of farmers and miners who had worked his family’s lands for as long as the Lords Riven had controlled them, fell back a step against the mounted mercenaries from the north, their cries echoing now in Lord Riven’s ears, even as he pressed his assailant to the ground.

With a cry, his sword glanced off the man’s shoulder guard, catching the edge of his helm on the point and flinging it off into the melee.

Riven felt his guts freeze and his steps faltered. Perhaps, the hesitation truly would have met him his end, but for an arrow loosed from forty yards over his shoulder and bearing the blue fletching of his house that sent the man—did his eyes deceive him? Was it really?—fumbling for cover lest he lose an eye to the next missile.

The Lord Riven gasped for breath, half-formed words tumbling from his lips as the battle swelled and bodies separated him from—but it could not have been, surely the Duke Briere—the King’s exiled brother—was dead? Surely he would not return to—but why wouldn’t he? Why wouldn’t he return to finish the job he began on Dierik’s family eight years ago?

Iron steeled his blood and the last Lord Riven firmed his grip on his sword. Surely, he could strike hard enough now to find out one way or the other.

Sign-up to receive updates about new releases and receive a free copy of HOTSPOT!